Pantaenius crew will „play the rabbit“

After this morning’s skipper’s briefing, the team who will be the rabbit at the start of the RPC 2011 was drawn by lot. The „Pantaenius“ crew of skipper Christian M. F. Schifter will sail on their „Hobart“ (starting number 57) ahead of the participating yachts. At twelfe o’clock on the dot the race starts. It will be supervised by the Croatian Race managers Baldasar Morozin, Sime Stanic and Dragan Penjalov as well as Austrian Herbert Koblmiller, who also is the skipper of the Safety Team aboard the sailing yacht „Chairos“. 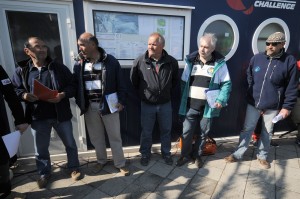 The referees at the briefing: